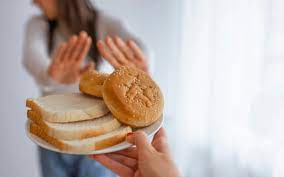 Celiac disease, gluten intolerance, and wheat allergy are the three major disorders that are known to trigger unpleasant symptoms following intake of foods made using wheat. Although the three conditions share similar symptoms, their pathogenic mechanism, diagnosis and treatment are quite different. Coeliac disease is permanent, whereas allergies and intolerances can come and go during a person’s life.
Celiac disease is a genetic, autoimmune disorder that occurs in reaction to the ingestion of gluten, a protein found in wheat, barley, and rye. The reaction to gluten causes inflammation and atrophy of intestinal lining, which can lead to malabsorption of nutrients and related health issues.
The diagnosis of Celiac disease is classically based on a combination of findings from a patient’s clinical history, serologic testing (anti-transglutaminase IgA antibody, anti-endomysium antibody, Deamidated Gliadin Peptide) and duodenal biopsies.
Wheat allergy is an immune reaction (IgE mediated) to a number of food proteins found in wheat, including gluten. However, unlike celiac disease, this immune response is most often temporary.
The diagnosis of Wheat allergy is classically based on skin prick tests (SPT), in vitro specific Immunoglobulin E assays (Blood allergy test).
Gluten intolerance, also known as non-celiac gluten sensitivity, the condition of people who cannot tolerate gluten in their food and experience similar symptoms to celiac disease, but without the same kind of intestinal damage as occurs in coeliac cases. .
Gluten intolerance is mainly a “diagnosis of exclusion” made after other wheat-related and non-wheat-related disorders have been ruled out.