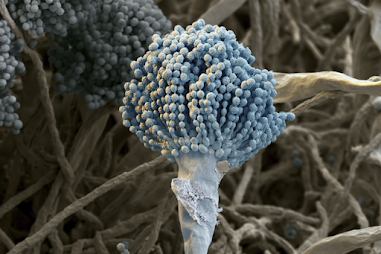 Aspergillus is a filamentous fungus known as a common mold (White Fungus). Most people breathe in Aspergillus spores daily with no ill effects. However, people with compromised immune systems or lung diseases are at a higher risk of developing aspergillosis due to aspergillus. Several recent reports describe COVID-19-associated pulmonary aspergillosis. Aspergillus fumigatus was the most common species causing co-infection in COVID-19 patients, followed by Aspergillus flavus.
Aspergillosis is broadly classified into different categories based on the site of infection and recurrence rates-
Diagnosis of aspergillosis is often difficult due to several factors such as delay in clinical suspicion and the lack of specific clinical findings. Conventional diagnosis of Aspergillosis is dependent on fungal culture and histopathologic examination of the affected tissues. But biopsies are not always feasible and time consuming. Microscopy (Fungal stain) and fungal culture of sputum and bronchoalveolar lavage (BAL) samples are less sensitive for diagnosis. Delayed diagnosis or misdiagnosis of aspergillosis, especially in COVID-19 patients could result in serious problems. Thus, early diagnosis is critical for their management.
Galactomannan (GM) is a polysaccharide antigen that exists primarily in the cell walls of Aspergillus species. Galactomannan may be released into the blood and other body fluids by growing hyphae and germinating spores in the early stages of aspergillosis. So, detection of the Galactomannan level in blood or body fluid is useful in making an early diagnosis of invasive pulmonary aspergillosis. It can be detected in the serum in some patients before the presence of clinical signs or symptoms of aspergillosis. Serial GM testing is recommended both for early diagnosis and the follow-up of patients with invasive aspergillosis as a prognostic marker to evaluate the course of the disease and the response to antifungal treatment.
The Galactomannan assay is positioned to detect only Aspergillus, but over the years reports have noted fungal cross-reactivity, more commonly with Fusarium, Penicillium, Cladosporium, Histoplasma, Blastomyces, Paracoccidioides, Cryptococcus, Nigrospora, Paecilomyces, Trichothecium, Lichtheimia ramosa,  Geotrichum etc.
False-positive results have been reported in patients receiving certain β-lactam antibiotics, e.g.,  piperacillin-tazobactam, amoxicillin-clavulanate, due to presence of galactomannan or cross-reactive antigen in antibiotic formulations. False positives may also occur with dietary cereals, humanized milk, pasta. A negative test cannot rule out the diagnosis of Invasive Aspergillosis. The concomitant use of anti-fungal therapy in some patients with Invasive Aspergillosis may result in reduced sensitivity.
Dr Prashant Goyal